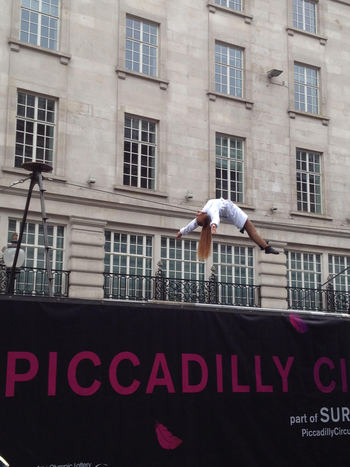 In 2007, Antoine Rigot and Patrick Vindimian designed a self-contained structure which becomes a fully-fledged circus apparatus: l'Etoile (the Star).

This unheard-of apparatus, made up of steel tubes and wires seemingly floating in space, does not need to be anchored to the ground.

The Star, a meaningful poetic object, becomes the set design of several creations of the company Les Colporteurs: that of a list of short shows for the public space called "The Stars" whose 3rd and 4th parts are currently on tour: "Le Chas du violon" and "Evohé", as well as "Sur la route" created in 2009.

For this new project "Etoile Mat", our goal is to combine high wire and Chinese pole.

A prototype was made in late 2015 and tests were organised in 2016 with students from the Fratellini Academy.

In June 2016, a public presentation was organised at the Fratellini Academy.